It appears that Los Angeles FC continue their losing streak, which began last week. After a heartbreaking defeat on the El Trafico derby, they had to visit the Mercedes Benz stadium against Atlanta United. Although the guest side lost 5-0 with a disappointing performance, the clash between them was quite interesting and exciting too.

The starting XI was the same as it had been last week. Urena was the lone striker and two speedy wingers named Blessing and Rossi. They also had Vela, who was the connection with the midfield and forward line. Feilhaber and Kaye featured as a double pivot. Lastly there were four defenders at the back: Moutinho, Ciman, Zimmerman and Beitashour. Therefore, the formation was the usual 4-2-3-1.

On the other hand, Atlanta played in a 3-4-1-2/3-5-2 formation which evidently changed 5-3-2 in the defensive phase as you may see below. McCann, Parkhurst and Robinso were the three midfielders and Ambrose and Gressel were the wing-backs, so they were pacing up and down on the flanks. Larentowicz was in the deeper position to help the build-up phase and Nagbe could join the attacks. Martinez and Villalba were the two strikers and Almiron was the connection between them and the midfield. He also had a highly important role, because of the fact that he had to drop to the midfield at the defence phase.

Before the match one of the most interesting questions was which system will be superior to the other. Because two major and different tactical approaches battled against each other. Ex-Barcelona manager, Tata Martino’s 3-5-2/3-4-1-2 which allows his team control of the midfield. On the other hand, Bob Bradley’s preference 4-2-3-1, which is a typical setup for counter-attacks. Thus it was a relevant question that how Atlanta can deal with the speed of Blessing, Rossi or Vela. Or another perspective, how guest side’s quick attack find a way in these circumstances.

Obviously, Atlanta started with a quite intense pressing like on the picture below. The ball-near players put the pressure on the opponent and the others marking the passing options. Therefore LA should choose the long balls and volleys which are a quite good opportunity for Atlanta to regain the ball. In the beginning, the home side may be too aggressive, because McCann made a risky and unnecessary tackle far from his base position. He was probably so anxious to get possession, but this mistake could easily lead to his team to a huge disadvantage. And it was close one because the referee at first glance gave a red card, but luckily after the review, he changed his mind and gave instead a yellow. 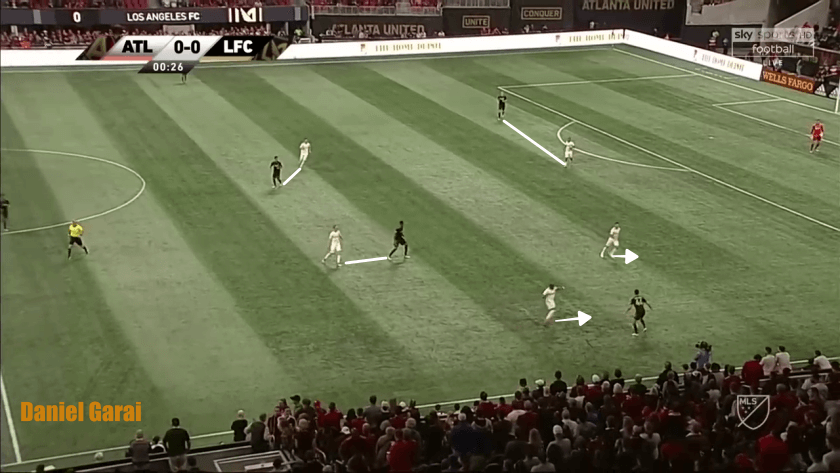 LA also use a press, although it was not as effective as the home side. Occasionally they could cause some trouble, but due to the amount of options, they could manage to progress up on the field. Surprisingly, Atlanta was the team who had some quick attacks. Like in the situation below. The pressing was not so perfect and the defender could pass a long ball to one of the strikers. Thus there was a pattern that Tata Martino’s side use to easily exploit the free space. Martinez, Almiron and Villalba were frequently dropping back to the halfway line around the left half-space to get the ball. 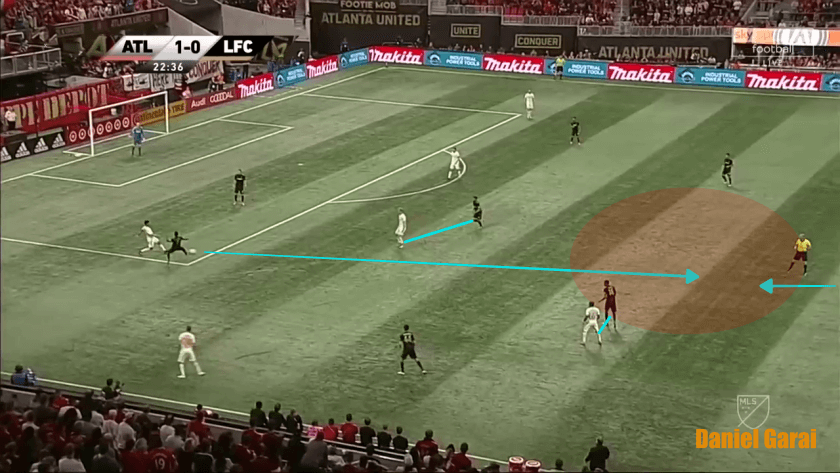 This was planned precisely by Tata Martino, because of the fact that the opponent’s formation allows finding space around the double pivot (as the picture shows below). Behind the Vela, Rossi and Blessing line there is too much space to cover and that’s why Feilhaber and Kaye need help from the wingers. 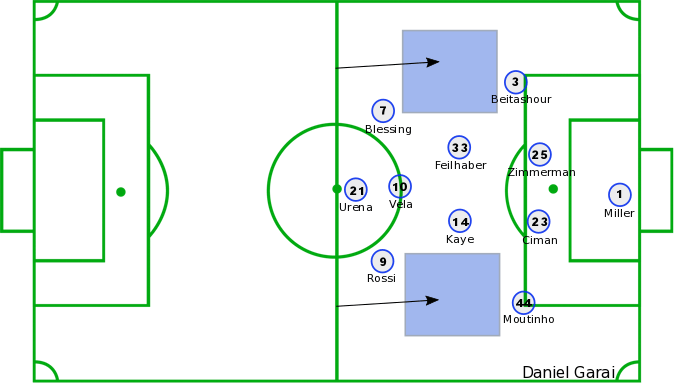 On the other hand, Bob Bradley’s team were struggling to find space and making some counter-attacks. They had some dangerous situations in the first half, but they always seen to make a mistake. I feel they had a lack of speed and precision. Sometimes the last pass went badly or the ball circulation wasn’t as quick as the situation needed. Of course, in some cases, the players made the wrong decision in certain situations. Also, Rossi wasted a huge chance in the first half.

Atlanta (on the left) was much more precise with their attempts than the guests was (on the right).

There were other problems with their attacks, like the isolation. Because of the five defenders, it provided a stable structure. The centre centre backs could easily neutralise Urena. He quite rarely got near to the ball. However, there was a solution to find space and created danger around the home side’s penalty box. Due to the 5-3-2 defensive structure, there was a weak point at the midfield. On both sides of the midfield line, LA could find space. As you see below. 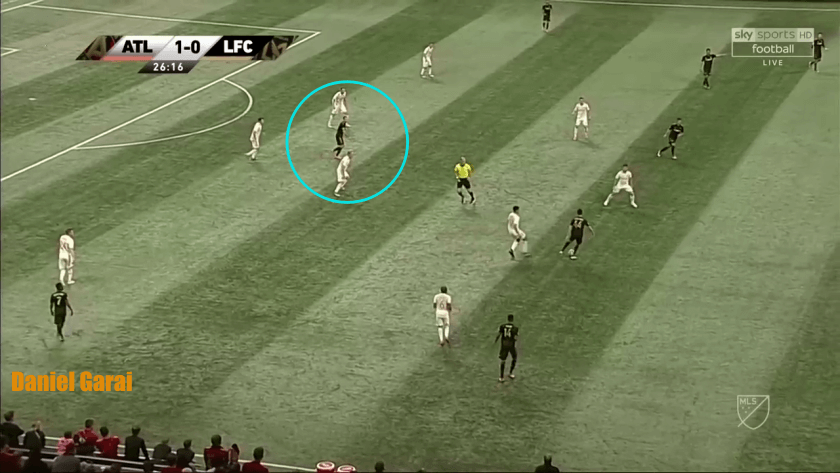 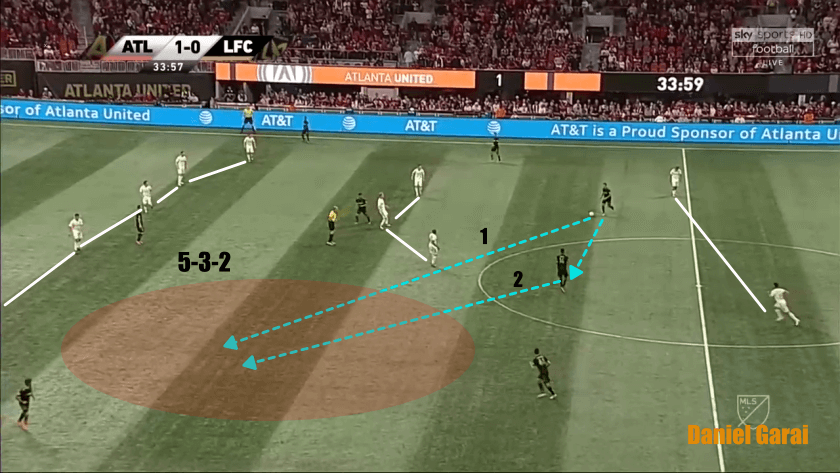 The three-man couldn’t cover the whole pitch in width so, they had to move where the ball actually was and this transition required some time. Thus with quick passing, Bob Bradley’s men could cause some trouble for the opponent. The faster the ball is moving, the less time the opposition have to adapt and the less access they have to the ball.

The scoreline suggests that there was a huge gap between the two teams, but it wasn’t as huge. Both teams had their chances, but only the Atlanta could take advantage of these. Perhaps much more concentration can help for Los Angeles FC, although they must improve because on an individual level they had a pretty bad performance. However, Atlanta had a decent performance and they are now only in need o one point to catch up the leaders of the Eastern Conference, New York City FC.