Despite the fact that only one goal happened in the match, it was a really exciting game. Mostly, because of the tactical aspect. Indeed there was a serious tactical battle between Chicago Fire and Columbus Crew, the two longtime Midwestern rivals. 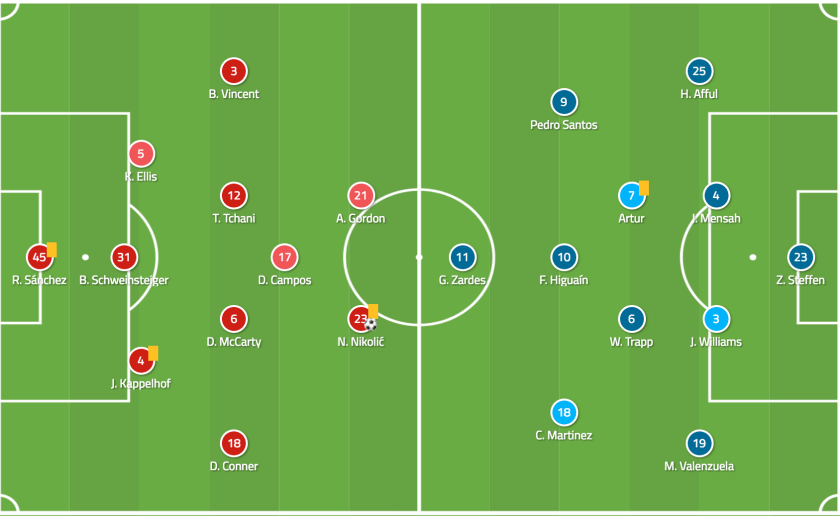 The home side formed a 3-5-2 formation, but we might call it 3-4-1-2. Nikolic and Gordon at the front, but Gordon had a free role. That means he appears everywhere and helps the attacks. Although McCarty was the playmaker, Schweinsteiger was the boss. There is no doubt he had the most exciting role in this match. He started in the middle of the back three as a kind of sweeper. Then he got a higher position. Campos played behind the strikers. The rookie was the connection between the forwards and the midfielders.

The Columbus played in a regular 4-2-3-1 formation, which is usually perfect for counterattacks,  but in this match, they had the ball much more than the Fire (64-36%). Anyway, They had the double pivot, Artur and Trapp. Two fast wingers: Martinez and Pedro Santos. Martinez had the task to drop back to help the build-up. The passes usually targeted at the left side, for Martinez or Zardes. And Higuain was the playmaker in the middle.

When it comes to the pressing, both teams used a different scheme, but both of them was effective. Crew pressing in a 4-4-2 shape with Higuain and Zardes at the top.They positioned themselves a few meters from the opponent’s defenders and tried to close down the space to force the opponent to use long balls or volleys. However, the home side was way more aggressive than the Crew. They used a quite high defensive line to compress the space and thanks to this they were able to press in the opponent’s final third. Gordon and Nikolic were focusing on the centre-backs. Campos frequently met with Artur and McCarthy marked Trapp. As you may see below Kappelhof also participated in this phase and he could move out far from his base position to follow Martinez. 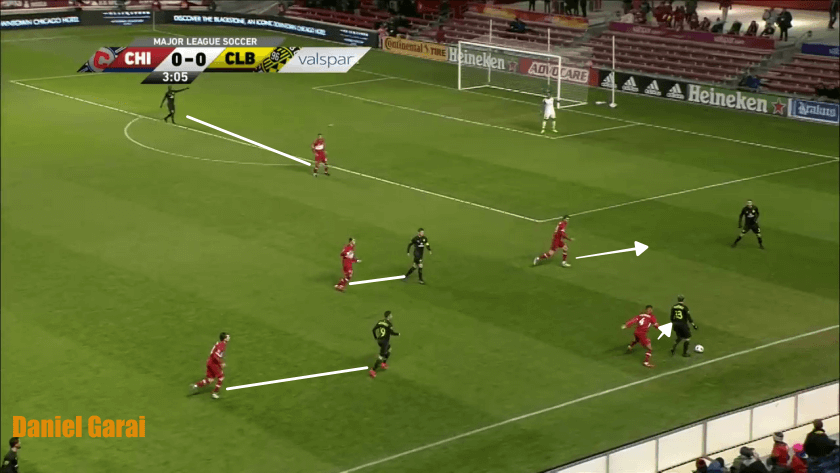 This system was a highly functioned pressing scheme which obviously requires a lot of energy, thus the home side did not use all the time, only periodically. But when this was in action, they could easily cause trouble for the Crew. The Fire already had a chance by their pressing ability at the early minutes. Moreover, the goal also happened from a stolen ball. Steffen, the Columbus Crew goalkeeper made a mistake and pass to Nikolic the Serbian-Hungarian striker, who immediately took advantage of this situation and scored.

Immediately after the goal Veljko Paunovic ordered his team to a deeper position and transformed into 4-3-3. Nikolic moved out to the left side and Schweinsteiger steps up to the midfield. Due to this switch, they had had not to worry anymore from the Crew counter attack.

The guests’ style was using long balls towards the forwards. The aim to use Zardes or Martines quickness to counterattack. However, they could not play their quick attacks, because of the opponent pressure. The home side marked tightly the opponents as you see below. 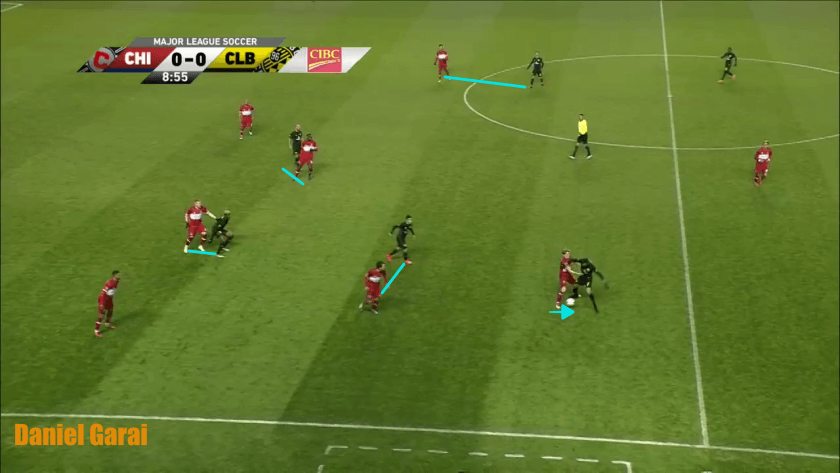 Playing under pressure was much more difficult than we thought. It must be frustrating and uncomfortable to play with this style. The Fire could maintain their positional stability and avoid being vulnerable to counter attacks. The Crew could not get in their rhythm, only a few times were when they had chances via quick attacks. Moreover, the Fire always paid attention to maintain their control on the field. It was a difficult task to outplay this massive midfield. 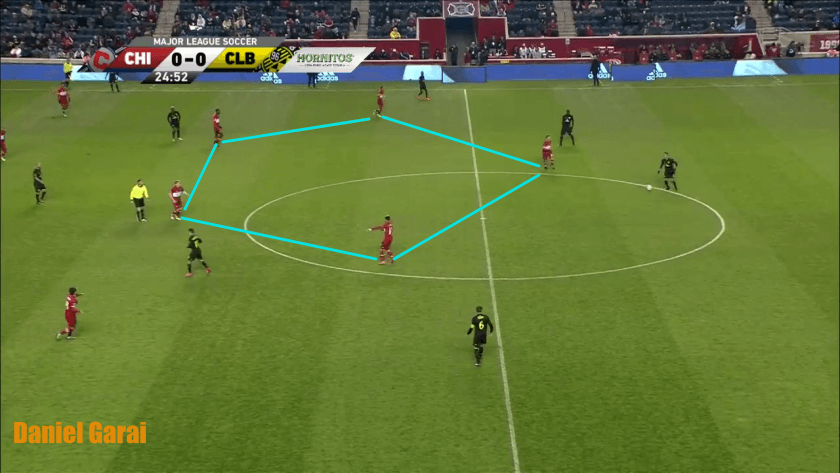 The key factor is to stay close to the opponents, thus they were able to create immediate pressure anywhere on the pitch. Where the ball goes they could put under pressure the receiver. To make separation from the markers is a hard job. But there are some elements which can help this. The guests used sometimes quick one-twos, which is a good way to get through the massive defence. Or they could use oppositional movements to make a difficult task to follow them. And also a good way to find space is to drag out the marker from his position. Although Crew did not use these methods and they had not figured out how to outplay this pressing and pressure.

Also, a big issue that Crew could not accelerate after they steal a ball because the home side immediately pressures the man on the ball. As the situation shows below. 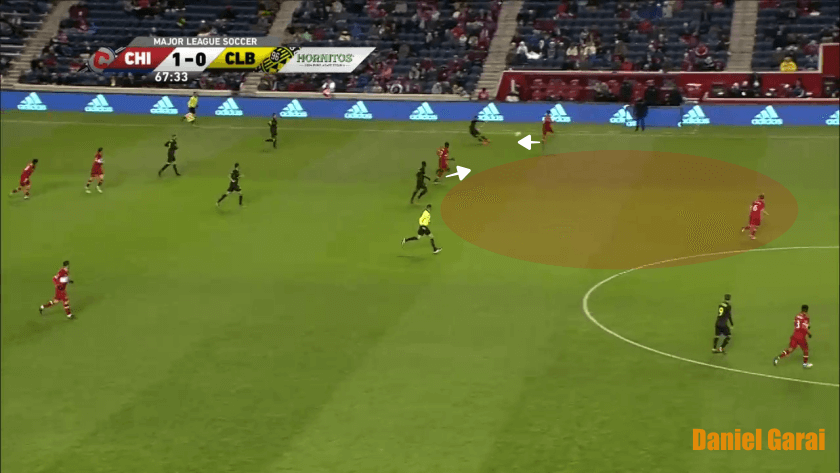 The Fire usually formed a narrow shape in the defence phase, therefore they could control the middle area. However, when the ball was on the wings they transition to the wing to close down that area. And made at least a numerical equality. 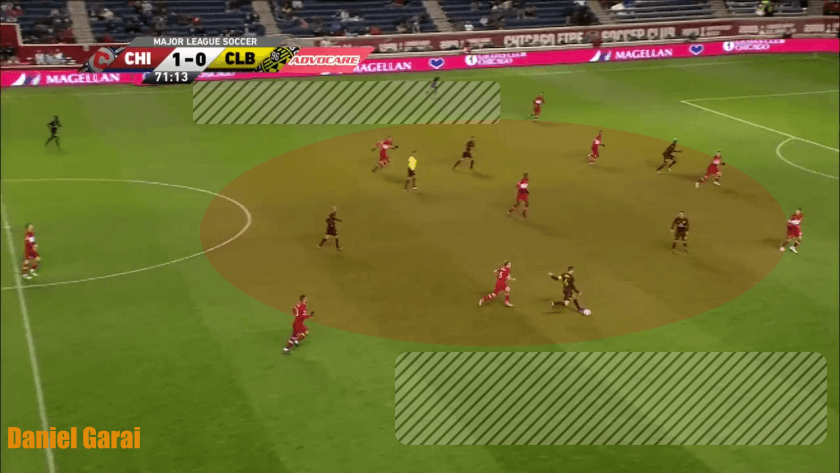 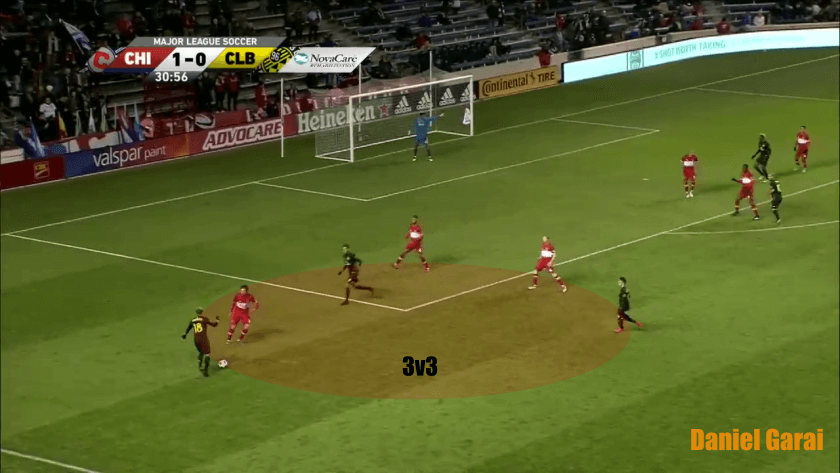 The corner is still a big opportunity to score, so the time goes on the teams comes up with newer ideas to avoid to concede a goal. Nowadays there is 3 major defending style. The earliest and the simplest is man to man marking. The second one is the mixed system, which contains man-marking and zonal defending. A few players pay attention to space and the ball and the others marking their opponents. And the last one is the pure zonal defence. And why am I telling this? Because the Chicago Fire use the rarest and hardest type of defending in these situations. They have a zonal defence at the corners.

As you may see above, the defending team formed a 5-3 shape to take control that area and pay attention to the ball. When it comes in they can make numerical superiority which really helps to avoid the head or any other scoring chances. Definitely, this method is the best if it works properly, although it difficult to learn.

Columbus Crew could not use their few scoring chances, but Fire did. It requires much more concentration if they intend to beat these kinds of massive teams like Chicago Fire. Judging on only this performance Fire should be in a much higher position in the standings. Although they have to continue their development.