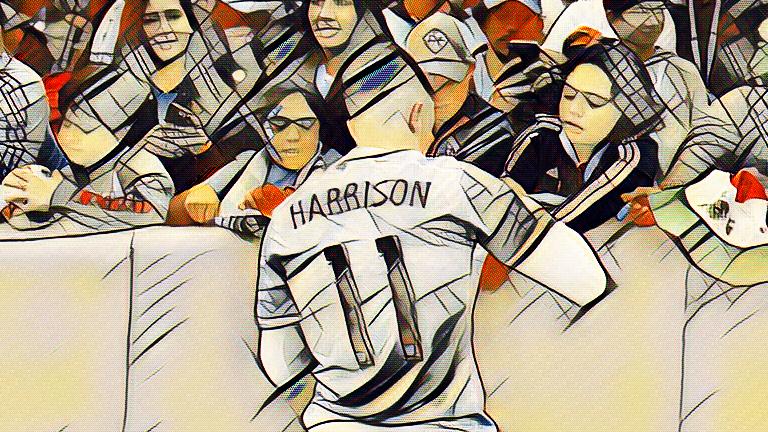 Englishman, Jack Harrison is the ‘Golden Boy’ of a New York City side. In a reverse to most English players who end their careers in the MLS, the youngster has the made the move to kick-start his. The left-footer who loves driving at defenders from his preferred right wing position has electrifying pace, the ball like a magnet stuck to his feet, not shy of trick and exuding confidence beyond his years.

Born in Stoke-on-Trent, Harrison is a product of the Manchester United Academy. Signing for The Red Devil’s as a 7-year-old. Harrison’s peers from United include James Wilson, Cameron Borthwick-Jackson, and wonderkid Marcus Rashford to name a few.

In 2010 at the age of 14, Harrison made the radical decision to leave the United academy. It was an idea pitched to him by his mum, Debbie, who was concerned that if her sons’ football career didn’t materialize, he needed something to fall back on with an education. Of course ‘Mums know best’ and the family upped and moved across the pond for a chance of at making it in the MLS.

On his arrival to the States Harrison’s played youth football for Manhattan Soccer Club, an affiliate of New York City FC. He then moved on to play for Wake Forest Demon Decons, the soccer side of the University he was attending, Wake Forest University, North Carolina. In 2015 the team won the ACC Regular Season Championship and was also NCAA Quarter-finalist. Harrison finishing the season as joint top scorer with 8 goals along with collecting awards for Offensive Player of the Year, Freshman of the Year and the prestigious Gatorade National Player of the Year for college soccer.

With such an illustrious youth career it wasn’t long before the big guns took notice. In December 2015 it was reported that New York City was trying to claim Harrison as a Home Grown Player in the hope they could sign him before the draft, on account of the fact he’d played for the previous 3 years for Manhattan Soccer Club. That didn’t wash and the MLS rejected this with Harrison being entered into the 2016 MLS SuperDraft. Chicago Fire duly selected Harrison as their #1 Overall Pick but he was later traded to New York City for the #4 overall pick and allocation money.

Harrison was handed the number 11 shirt by manager Patrick Viera but his New York City career was put on hold for 3 months due to a fractured pelvic bone. In May of 2016, he was an unused sub for a 1-1 away draw to Toronto FC. Just two days later Harrison made his debut in a 7-0 trouncing by rivals New York Red Bulls, with Harrison’s performance being described as “a shining light” in the embarrassing defeat. Harrison continued to start and impress, grabbing his first goal for his side, a 56th minute strike in a 3-2 defeat to Real Salt Lake. NYCFC made up for their 7-0 defeat to their rivals in July 2016, with a 2-0 win in the Hudson River Derby, with Harrison grabbing the opener and MOTM, the win being NYCFC’s first over New York Red Bulls. Harrison finished the 2016 campaign playing 23 times and scoring 4 goals as New York City finished 2nd in the Eastern Conference. A 7-0 aggregate defeat to Toronto ended their season. Harrison was nominated for MLS Rookie of the Year and MLS Goal of the Year Award but lost out to Jordan Morris and Shkëlzen Gashi respectively.

Harrison was once again a regular starter for the 2017 campaign and grabbed his first goal of the season in a 2-1 over San Jose Earthquakes. Once again becoming a pain in the side of New York Red Bulls, Harrison scored in a 2-0 victory, NYCFC’s first win at the Red Bull Arena. Harrison recording an impressive 10 goals in his 31 starts for New York City as regular season nearing an end, with them sitting 2nd in the table.

In October 2017, due to injuries to Sheyi Ojo and Ruben Loftus-Cheek, Harrison got a call-up to the England Under 21’s by manager Aidy Boothroyd, for the UEFA EURO U-21 qualifiers against Scotland and Andorra. With the player himself stating “I was thrilled when I found out; I was really speechless,”. So far it seems the gamble to move abroad has paid off for the MLS star.