David Beckham, Ashley Cole, Frank Lampard and Steven Gerrard, what do they all have in common? They’re all Englishmen who crossed the pond to see out their footballing careers.

To most English football fans, our players going over to the MLS is the most we hear about it, but with a new MLS season on the horizon, I thought I’d share my experience of the league to give a somewhat accurate representation.

As the English football season was just beginning back in August I had the chance to explore New York, and of course, I looked for some football to watch to numb the pain of Arsenal losing to Stoke.

Luckily, I had arrived during the gameweek of the Hudson River Derby between New York Red Bulls and New York City FC. To add some extra spice to the game, both teams were looking to take off form-wise and make the MLS Cup playoffs (which both did).

Also, less than three weeks earlier, NYCFC had come out on top in a five-goal thriller which saw David Villa score a hat-trick and Englishman, Bradley Wright-Phillips, score twice for Red Bulls at Yankee Stadium (below).

Even though Red Bulls did have the Lewisham native Wright-Phillips, like myself, in the team I was still torn about who to support going into the game.

Both teams had Arsenal connections with Patrick Vieira managing NYCFC and Thierry Henry having played for Red Bulls for a number of years.

In the end, I decided to go into the game as a neutral.

Coming over from England I also had expectations for a derby matchday having experienced a few London derbies. Some of those expectations were pretty much flipped before I’d even stepped on the train to the match.

Fans were wearing their team colours which wasn’t surprising, but the thing that did surprise me was that rival fans were travelling to the game together. Something I’ve never seen going to a London derby and I doubt I’d ever see.

Don’t get me wrong it was nice to see a set of rival fans being civilised together and to find out how much they knew about the game in Europe as well as in the MLS, but it did take some adjusting to.

That adjustment continued at arrival at the Red Bull Arena (below), which is actually in New Jersey, not New York. 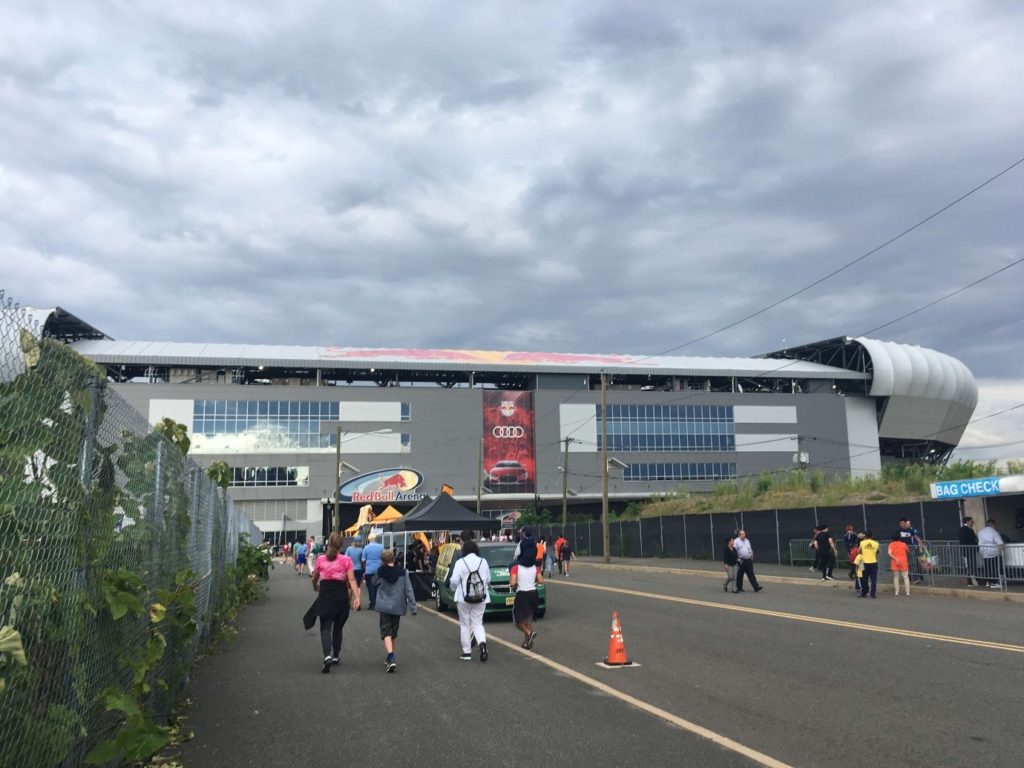 From the activities for kids in the fan park areas to the higher levels of security which saw me have to leave my rucksack in the bag check to the right of the picture above outside the stadium, it all seemed very different from normal.

And despite the fans seeming friendlier around each other, the security was a bit more intense than I’m used to. Yes, at The Emirates they’ve tightened up on security but at least I could bring my rucksack into the ground there. The level of security didn’t take away from the guards’ personality though as one kindly told me the zip on my cargo shorts were undone.

After making two trips to security I was finally in, and the atmosphere was much more carnival-like than the build up in English football and that was right up to kick off:

After the firework show, a rendition of the US national anthem and once the stadium had filled with Red Bull and NYCFC fans, some of which were sitting amongst each other, it was time for what everyone had come for, the football.

As expected the football itself wasn’t at a Premier League standard but that didn’t take anything away from the game at all. For 90 minutes, it was an end to end game accompanied by non-stop support from both sets of fans who were occasionally given the chance to cheer.

In the 25,000-seater you could feel the atmosphere build as chances came and went just as you would in most Premier League grounds.

Either side of half-time Red Bulls hit the post through Michael Murillo and Felipe with two efforts which gave the home fans a lot of encouragement.

After being played through by Wright-Phillips, Murillo dinked the ball over NYCFC goalkeeper Sean Johnson to excite Red Bull fans who then sighed together as it clipped the post.

Almost instantly after the break, Felipe gave the home fans something worthier to scream about. Picking up the ball about 20 yards out he shifted the ball onto his right foot before letting off a great shot which saw most of the stadium jump up before it bounced off the crossbar and out to safety.

As usual in football though, you often pay for missing your chances and that’s exactly what happened.

Some slick passing play from NYCFC saw Villa put Maxi Moralez one-on-one with Luis Robles in goal before he smashed it home.

As you’d usually see in the Premier League a small corner of the stadium erupted and despite me seeing a lot of fans spread out, it was clear that there was a firm of sorts of NYCFC fans to make noise.

The home fans did get their moment to shout though with a penalty about an hour and a bit into the game which came from RJ Allen seemingly being bundled over in the box.

From where I was sitting, which was quite high up in the stands, I wasn’t too sure it was a penalty, but like at any football match, if a player goes down in the box the fans of that team are instantly screaming at the ref for a pen.

Stepping up to take the penalty in front of what was pretty much a wall of red was Gonzalo Veron, who calmly hit the ball down the middle of the goal which allowed the fans behind the goal to set off all the pyro they’d somehow got into the stadium. 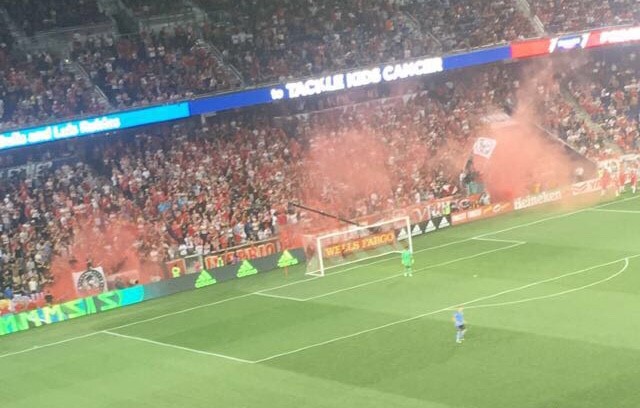 Despite having their flares put out during the game, the carnival-like atmosphere created by the fans thankfully didn’t disappear as both sets of fans kept at it for the full 90 minutes and the journey back.

Shooting back to the city on the subway you saw fans who weren’t depressed after the first ever Hudson River Derby draw but happy to see their team play as their chants filled the night in the city that never sleeps. Maybe that’s something we can take into our matchdays.