The basis of this article actually comes from something uttered by the now-former United States Men’s National Team coach Bruce Arena in November, when he suggested that MLS should consider mandating that its teams play American players a minimum number of minutes over the course of a season. November is significant because it was a national TV appearance just prior to the USMNT’s first fixture after failing to qualify for the World Cup. The words ‘smoke’ and ‘screen’ cannot shout any louder.

Just before we get into this, this is not a new concept. In fact, it’s not a new concept in North America in general. Recent discussions have been held around Mexico’s Liga MX returning to it’s ‘20/11’ rule in 2018 which will require each of its clubs to play young Mexicans a minimum number of minutes.

When it was first in place from 2005 – 2011, the rule required teams to play Mexican players under the age of 20 years and 11 months at least 1,000 combined minutes over the course of each 17-game Apertura and Clausura season. Teams that didn’t comply were docked three points. The rule was designed to benefit the Mexican national team and arguably some positive results followed. Mexico stars Andres Guardado and West Ham’s Javier Hernandez jumpstarted their careers thanks in part to the mandate and the country’s youth national teams excelled while it was in place. However, it’s worth remembering for that for every Chicharito, there are others who did not excel.

It’s no surprise that in the immediate aftermath of October’s failure to qualify for the 2018 World Cup, talk about this kind of rule to MLS only increased because football managers, players and even journalists will do anything they can to deflect responsibility from the performance, the humiliation at the hands of Trinidad & Tobago in Couva. It reminds me of a recent discussion I had regarding man marking versus zonal marking at set pieces. Managers want man marking so they can see exactly who was to blame for letting the goalscorer find space to head in that last-minute winner. Players, somewhat understandably, want zonal marking because then they can shift the blame onto the system.

Yes, introducing such a rule would provide short-term benefits for the United States, Canadian and potentially Costa Rican national teams (it seems every other transfer story on the MLS Rundown relates to a Costa Rican) but the MLS is not the league to implement this rule in.

I believe it would work, for example, in the English Premier League. The league is established, it has a loyal fanbase, profitable sponsorship links, amongst highest level of stadia and facilities, not to mention some of the best players in world football. Introducing a rule where a team needs to give X number of minutes or mandating two or three young players per team in a league that features the talents of Kevin De Bruyne, Toby Alderweireld, Xherdan Shaqiri, David De Gea, César Azpilicueta, Mesut Özil and Mohamed Salah is not going to significantly reduce the quality on show.

However, the MLS is still developing. Its priority should be putting the best product possible on the field and enhancing its reputation. That’s why quality players like Steven Gerrard, Andrea Pirlo and Kaká have lit up MLS in recent years. Forcing clubs to give more minutes to their young domestic players at the expense their more polished counterparts isn’t a good strategy if it leads to shoddier soccer.

While the rule would not be a positive step in my opinion for MLS teams, there is perhaps a compromise to be considered and it’s one that could balance the development of young domestic players without compromising quality on the pitch.

My own suggestion and one that has been talked about on social media would be to reward MLS teams that develop and play their youngsters. Distribute additional General Allocation Money for teams who give their domestic U21 players more time on the field, in essence a carrot to attain, not a stick to beat them with and blame for the failure of the national side. The incentive system could operate on a sliding scale, with the team that gives the most minutes to American or Canadian U21 players getting the most allocation money, the second-placed team getting slightly less, third-place slight less and so on down the list.

I don’t know how much this has been considered, if at all. I confess my knowledge of MLS is startlingly slim, which is the reason the MLS Rundown exists. First and foremost to enhance my own understanding of how MLS works and then to share that learned knowledge with readers of MLSfootball.com. I’m delighted that we’ll have Craig Shuman writing on the site, who is an Atlanta United fan, especially because he has already talked about explaining in terms I can understand the differences between the English Premier League and MLS with its crazy rules and allocated money.

On twitter, Sam Stejskal (@samstejskal), had a look at which teams have played U21 players during the 2017 campaign and the results are very surprising. If you take the old Liga MX standard of playing domestic U21s at least 2,000 combined minutes (1,000 minutes per 17 games) in the 34-game season, only two clubs met that standard – Real Salt Lake with 5,146 minutes and New York Red Bulls with 2,696 minutes. Only four more teams recorded over 1,000 minutes and most alarming of all, six teams including MLS Cup finalists Toronto FC and Seattle Sounders recoded ZERO minutes. This is the full list, again was published by Sam Stejskal and totals include pre-birthday minutes played by players who turned 21 during season: 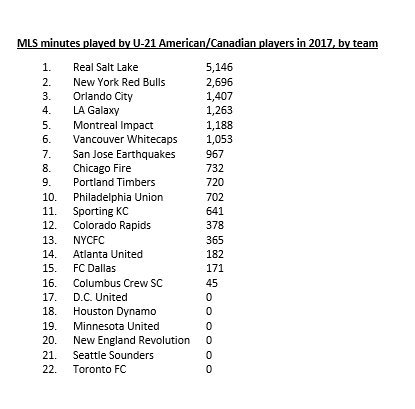 This will, of course, change. Young talent will not remain on the sidelines especially when you consider promising young players like Whitecaps’s Alphonso Davies and of course Brooks Lennon will star yet again having signed permanently for Real Salt Lake under the leadership of Mike Petke.

A Liga MX-type rule would guarantee young Americans and Canadians minutes in games but the league as a whole would be worse off for it. The incentive General Allocation Money system would give bonuses to clubs who demonstrate investment in their academies and show faith in their young players, while not taking away independence from clubs who either can’t or won’t play their young domestic players. Not limiting competition with teams and limiting the risk of reducing the quality of games, I feel, is the way to go.