Atlanta United earned their first ever win against the Red Bulls in the first leg of the Eastern Conference final. Tata Martino’s men almost got the job done with the second leg to be played this coming Thursday. However, the five stripes are one big step ahead of the Metros after their 3-0 win last Sunday and here is how they managed to pull it off… 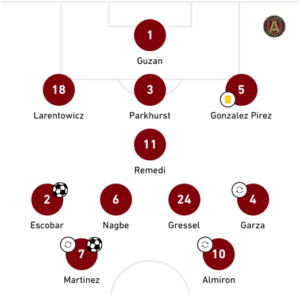 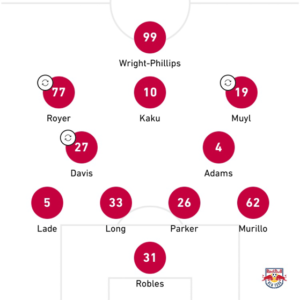 Ever since the start of the playoffs Tata Martino has been applying a few different touches to the usual disciplined and energetic 3-5-2 (see my previous article: Atlanta United’s tactical profile). These changes have been very effective lately: take for instance a 4-1 win on aggregate against NYFC.

Now these changes involves rotations in the positioning of certain players which of course is turning to be very practical considering the different roles played by Martino’s men.

Firstly, Almiron moved next to Martinez in the striker position. Gressel, ex right wing back now, replaced him while a speedy and lively Escobar takes down the right flank. Moreover, Larentowicz took a place as a right center back. These switches had different effects on Atlanta’s game plan which contributed to more damage to their opposition such as adding more intensity and keeping a higher defensive line that influenced a lot the Red Bull’s performance.

Despite being known for their counter attacks and defensive approach to their games, Atlanta relied also increased their pressure starting from the front.

Martinez and Almiron pressed on the center backs while Nagbe and Gressel followed the ball going wide to the areas where Escobar and Garza would be there to force the Red Bulls wide players towards the touchline. In fact that forced the opposition to put out inaccurate passes which was the main reason for Escobar’s goal in the 71st minute for instance.

Having Gressel in midfield instead of Almiron was the closest thing to a genius move for the five stripes; it meant that Almiron would be more comfortable in the final third with practically no defensive duties and gave him more freedom to roam as well since a former full back is covering him. That resulted in a few positive points:

Nagbe being the energetic and dynamic player he is, plays the role of a box to box midfielder, covers the space behind Escobar and could start the attack after collecting the ball from Remedi who would be shielding the three center backs. Nagbe would also contribute to the final third creating overload coming from the back on the opposition’s defense.

Moreover, having a former anchor type midfielder in defense such as Larentowicz could be very helpful considering his defensive abilities but also his experience and energy in midfield. Larentowicz contributes to the high press effectively and can do great things with a ball at his feet, take for example his beautifully curled pass to Martinez for the first goal, specially when he has no one marking him…he is also able to cover a lot of space for Escobar and Nagbe.

Finally, the wingbacks role. Intensity and high press in football is often dodged by higher intensity and energy and that’s what the Atlanta players did against Red Bulls, but they also exploited their initial qualities: Garza and Escobar. Red Bulls often pressed with a lot of players to close down the space on the ball holder which would, at times, work, but Tata Martino found a counter strategy to that: he used his wingbacks to stretch the lines and create spaces in midfield and that also meant that there would always be a passing option and a free player on the touchline when a concentrated press is manifested by the opposition, and that helped Atlanta to be able to escape from the press, switch the play and exploit the space behind the pressing group of players.

To give a clearer image of Atlanta’s shape, in a defensive state they switched to a 5-3-2 formation and in the build up or in attack they looked a bit like this: 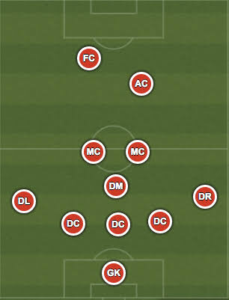 With the wingbacks going up and down the pitch and being crucial in the final third, creating overloads and decisional crisis for the Red Bulls defense.

Larentowicz got high up the pitch and considering he is a defender no one from the Red Bulls players was able to put pressure on him in the position he was at, he then placed a perfectly curled pass over the top, between two center backs, on the chest of a very well positioned Josef Martinez and it was only a matter of time until the Venezuelan had found the net.

A high press performed by Martinez and Nagbe, which led to two inaccurate passes and the ball fell at the feet of Miguel Almiron, the one man you wouldn’t want to have the ball with a flying Gressel running behind you, unfortunately for Murillo that was the case. Gressel then put a great low cross in retreat to a pacing Escobar from the back who finished it beautifully.

Despite Red Bulls trailing by two goals, that didn’t stop them from keeping their defensive line but that wasn’t enough. A hungry Villaba coming off the bench had found the post a few minutes earlier and was determined to find the net, the fresh striker dropped between the defense and midfield line and took a low curled shot from outside the box that left Robles looking at the ball.

With an important clean sheet, a satisfying result Atlanta United can almost be sure to be this season’s Eastern Conference champions. While for the Red Bulls, they need a historical performance to get the title since no one has ever made a comeback from a 3-0 loss in the first leg in MLS history.