According to Turkish newspaper Fotospor, Besiktas have reached a principle agreement for the transfer of Cyle Larin from MLS side Orlando City.

Following on from Larin’s proclamation that he wants to play in Europe next year and Orlando general manager Niki Budalic stating that the club would support those overseas ambitions, it’s no surprise to see a move materialise.

Since being picked first overall in the 2015 MLS SuperDraft, Larin has been one of the league’s most prolific scorers, netting 17 goals as a rookie followed by a 14-goal campaign in 2016 and a 12-goal season in 2017.

Due to the MLS contract stipulations, Bingham remains out of contract, meaning he’s not yet officially on LA’s roster. The Galaxy, who have traded away all three of their goalkeepers from the 2017 season in recent weeks, now have his MLS rights. A 2016 MLS All-Star, Bingham has three career caps with the US men’s national team.

MORE STARS IN THE GALAXY

Arriving from Cardiff City on a free transfer is Swiss-born Venezuelan international full back Rolf Feltscher.

Having played in England, Germany, Italy and Spain, he will be added to LA’s roster pending receipt of his P-1 Visa and international transfer certificate. Feltscher has made 19 appearances for Venezuela since making his debut in 2011 at the age of 21, including Copa América Centenario action in the United States last year, and most recently appeared in CONMEBOL World Cup qualifying action over the summer.

Major League Soccer’s five representatives in the 2018 Scotiabank CONCACAF Champions League have learned their fates in the first round.

Toronto FC, fresh off a historic treble that saw them clinch all three domestic trophies on offer in 2017, will begin their quest to become the first MLS team to win the CCL by facing fellow MLS side, Colorado Rapids.

FC Dallas, who qualified as the 2016 Supporters’ Shield winners, were drawn against Panamanian side Tauro FC. It will be the second consecutive year that Dallas have faced a team from Panama in the CCL knockout rounds, following their 5-2 aggregate victory over Árabe Unido in the 2016-17 quarterfinals.

Seattle Sounders, returning to the CCL as 2016 MLS Cup winners after a year-long hiatus, will face Salvadoran outfit Santa Tecla, who qualified by winning back-to-back championships in their native land.

Finally, the New York Red Bulls will face a difficult match-up against Honduran outfit CD Olimpia, winners of the inaugural CONCACAF League. Though they did not face MLS opposition last time out, Olimpia memorably knocked the Portland Timbers out of the 2014-15 tournament and pushed Sporting Kansas City to the brink in the previous year’s group stage.

MLS teams avoided the unenviable task of facing one of the two Costa Rican sides in the Round of 16, with Tico qualifiers Saprissa and Herediano both drawing Liga MX opposition in the form of Club América and Tigres UANL, respectively. Elsewhere in the draw, the first Dominican team to qualify for the CCL – 2017 Caribbean champions Cibao FC – were handed the mammoth task of a two-legged series against Chivas de Guadalajara, one of Mexico’s most storied clubs. 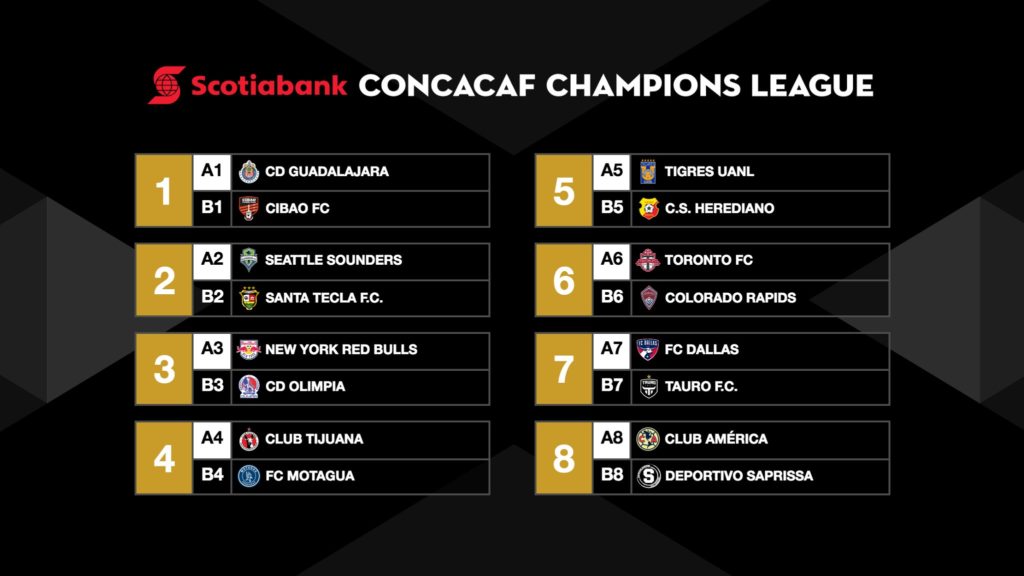 This is the first year that the CCL will feature a 16-team knockout tournament, which comes along with a change in the schedule that will see the entirety of the competition in a single calendar year. The winner of the 2018 CCL will represent CONCACAF in the 2018 Club World Cup, which is set to take place in December in the United Arab Emirates.

Atlanta United will need to pay $20 million to sign target Ezequiel Barco… Toronto FC’s Greg Vanney has been named CONCACAF Men’s Football Coach of the Year… Wednesday will see an announcement made in Nashville regarding the future of soccer in the state. Nashville was one of twelve cities to submit formal bids in January for a total of four expansion slots.