It has been almost a year since Ibrahimovic’s outstanding debut vs LAFC, which was regarded to be the best MLS debut in history, however Pozuelo’s first game in the American league is proving to be a great contender for that title. The former Genk captain contributed 3 goals out of 4 against NYCFC with an assist, a cool Panenka penalty, and a cheeky outside of the box chip. 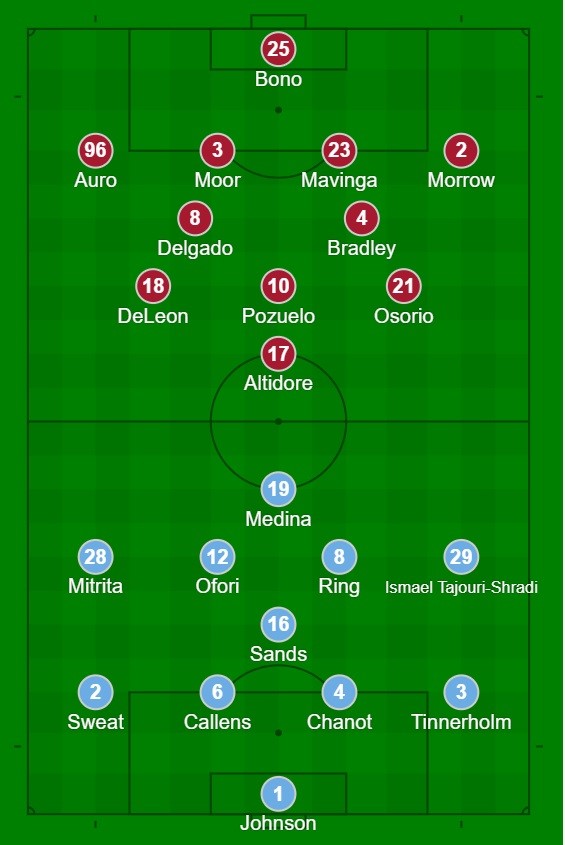 Greg Vanney’s men won their first three games of the season, a record for the club’s history books. They lined up in a 4-2-3-1 shape. Discipline, freedom and fluidity were the ingredients that helped Toronto to outplay the Pigeons.

In the modern game fullbacks can be very effective, and it is no different with Toronto, Auro has the freedom to overlap behind De Leon, but the player that made the difference was Morrow, the number 2 is crucial to the attack and can be clinical as well. Taking advantage of Tajouri’s lack of discipline and tracking back, Morrow gets behind Tinnerholm, stretches the defensive line and with the help of Osorio the latter is often outnumbered in a 2 v 1 situation. Morrow doesn’t shy away from the box the 31-year-old even scored a goal that was later ruled out for offside.

The Spanish playmaker took Sebastian Giovinco’s number 10 after his departure to Al Hilal, and he might just be taking the Italian’s place in the supporter’s hearts as well. So how did he contribute to this masterclass? The 27-year-old is gifted with great dribbling skills, pace, cheek, composure and mostly vision, in his time with Genk, in 175 games, he scored 25 goals and created 60.

Pozuelo is given a big amount of freedom on the pitch which makes matters worse for NYCFC, he drops deep to receive the ball from the back, stretches the midfield line from the defensive line, creating space for pacey players like Osorio to step in.

Moreover, the former Genk captain drops between the defensive and midfield line, being a passing option in a dangerous area and creating a decisional crisis in terms of who is going to mark him. If a defender took a leap of faith, he would be dragged and leaving space for a hungry Altidore to run into. Pozuelo’s vision is crucial in these situations, not only does he create the space, but if he has the ball, he would play a perfect pass in that space.

In a defensive state the Reds would switch to 4-4-2 with a high pressing line, with the forwards (Pozuelo and Altidore) pressing the center-halves, forcing imprecise long balls or wide passes thus using the touchline as another defensive factor.

The 4 midfielders would serve as a wall blocking every passing option in the middle of the pitch with disciplined Osorio and De Leon supporting the fullbacks, Bradley and Delgado marking Ofori and Ring respectively, they were also able to win back the second balls coming from the NYCFC defense thanks to their physical superiority.

Pozuelo drops deep to receive the ball, thus stretching the lines, making NYCFC loose their compact shape. Osorio steps in to the space unmarked, Pozuelo gets him the ball, Osorio has place to dribble in until the number 10 comes from behind to join him, the number 21 passes back the ball to his playmaker. The Spanish magician dribbles Tinnerholm and Callens and takes them out of the game, everyone is expecting Pozuelo to try and find the net for the first time, yet the Spaniard didn’t forget about Altidore, he slips the ball to the American international who opens the scoring for Toronto.

Pozuelo has been very effective for 58 minutes yet didn’t find the net until referee Chris Penso decides to give a penalty after a VAR review. Alejandro Pozuelo opens his scoring tally in the MLS with a composed and cold blooded Panenka to surprise everyone.

20 minutes later it’s a counter attack lead by Osorio, Altidore runs to the left while Pozuelo goes to the right, therefore stretching the defenders and leaving space in the middle. Pozuelo is running between Sweat and Callens, the latter chooses to close the space in the middle thus leaving Sweat to mark Pozuelo, but that’s too bad because Sweat was behind the Spaniard. The number 10 takes a couple of steps away from Sweat to get space to get the ball, matters are not getting better for Blues defender who sees Bradley making a run towards the box in front of him, and becomes another victim of a decisional crisis. Pozuelo receives the ball in a fair amount of space, has time to look at the keeper, notices that he is off his line, decides to chip him, the ball finds the net, everyone at the BMO stadium is stunned with their head in their hands after witnessing the genius of the Spaniard.

Less then 10 minutes are remaining, Chapman comes on for Pozuelo. The referee blows for a free kick on the right side of the final third. Bradley decides to play it short to Osorio who plays it back to him, the Toronto captain passes it to Auro on the edge of the box, he is surely a good defender but he also showed the dribbling skills he’s got in his locker. His dribbling creates space for Chapman to run into, Auro plays it to the latest addition to the pitch who buries it to finish up Toronto’s exceptional night.

With beautiful football, discipline and organization the Reds were able to enjoy a historical night with a fair amount of domination of the game. “It will be impossible to forget this night” said Pozuelo after the game…nor will any Toronto supporter.