The Houston Dynamo and Seattle Sounders faced off in the first round of the two-legged MLS Western Conference finals last Tuesday. Houston played host to the first match with the second leg to be played in Seattle November 30th. This match looked like it would be a very interesting tactical display, with differing styles as well as the dynamic of a second leg looming. Both teams had all to play for, as Houston would look to dominate at home while Seattle would have understood the importance of away goals. Seattle would end up winning 2-0 but Houston will have hope as they were forced to play the majority of the match with ten men.

Both teams started the match lined up in a 4-2-3-1. Houston would maintain roughly the same shape both attacking and defending. Seattle, however, would shift into a 4-4-2 defensively with Dempsey pushing up in line with Bruin. Lodeiro and Jones would then drop in to create a bank of four in the midfield. 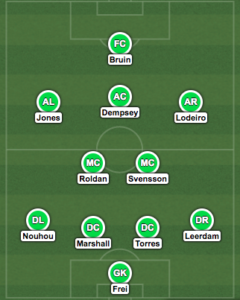 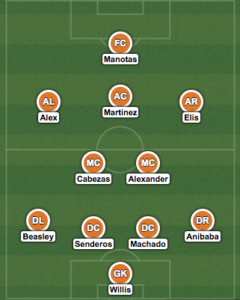 Before Houston’s red card in the 28th minute, the match was a fascinating tactical display of structure versus mobility. Houston were fluid on the ball but in their shape, they remained structured and rigid. When any of their front four attacking players got on the ball, Houston looked dangerous. This was especially true on their counter-attack as Houston would look to spring Elis or Alex in behind on the wings to cause trouble with their pace and ability.

Limited mobility between their front four would sometimes work to their advantage. Whenever a Houston defender or midfielder was on the ball, they could easily identify where their targets were. There was also limited confusion in defensive responsibility. However, for the majority of the first 27 minutes, Seattle were mostly untroubled except for a few dangerous looking counter attacks.

Seattle’s mobility proved to be too much for Houston, as this would create both the opening goal and the penalty Houston were forced to concede. Seattle’s opening goal in the 11th minute came off of a well-constructed corner seen below: 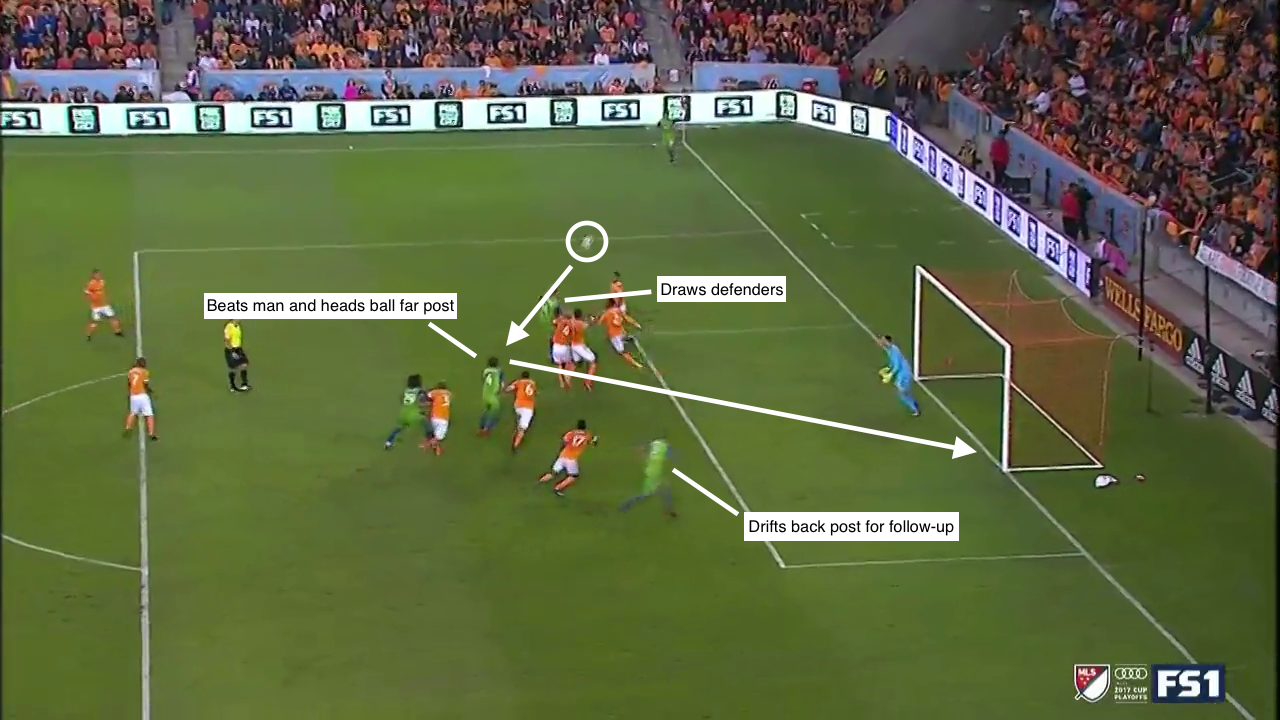 It was the mobility of the Sounders attacking unit that created the corner kick opportunity. Although Lodeiro was set up as a right winger, he often drifted over to the left side, creating overloads with Jones and Nouhou. Bruin would stay high to provide depth but Dempsey and Lodeiro’s mobility and ability to create three-versus-two overloads on the wings created numerous chances including this corner kick as well as the penalty Houston conceded.

Houston were reduced to ten men after Anibaba brought down Seattle’s Jones in the box on a counter attack. Lodeiro’s instinct to come centrally as opposed to stay wide as a right winger gave him the opportunity to play Jones (LW) in behind and on goal. In a more structured system, Lodeiro may have decided to stay wide instead of drift inside as another attacking midfielder. 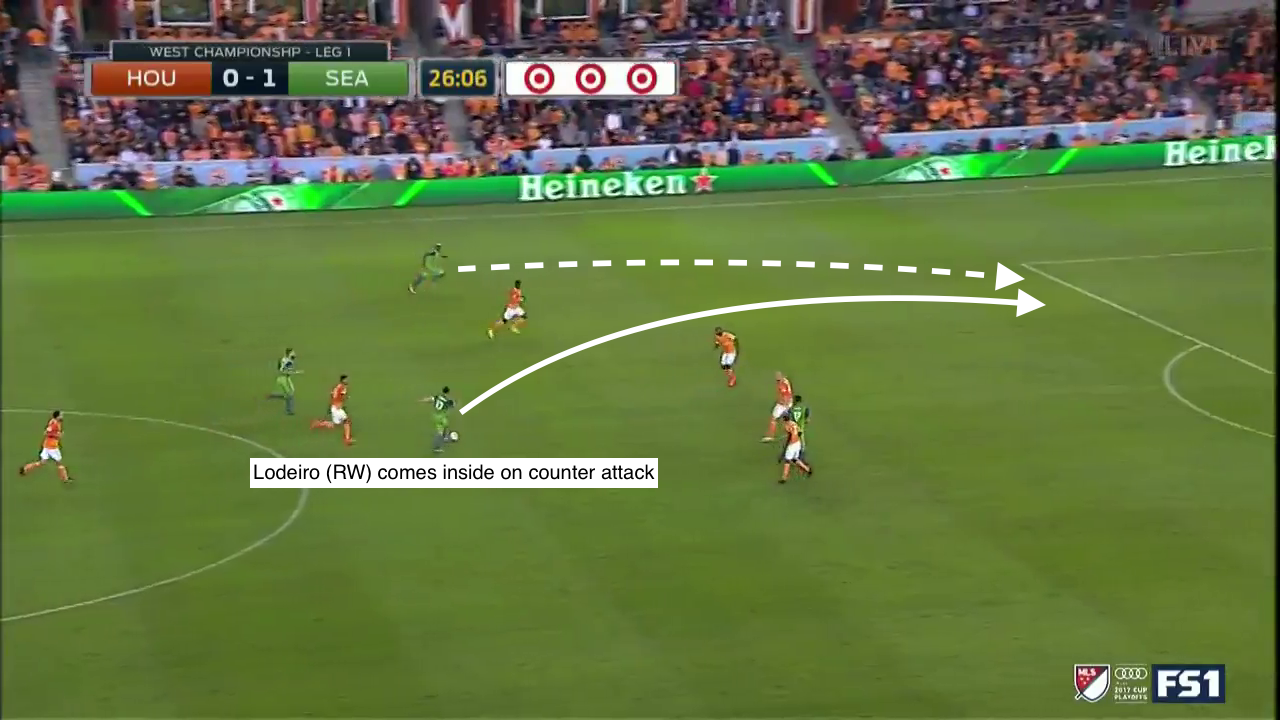 Although Houston were able to create some half-chances, they struggled defensively with the movement of Dempsey and Lodeiro. Their mobility and ability to create overloads proved to be too much. Unpredictability in the attack can be a major advantage if a team is on the same page and Seattle’s attack was surely clicking in the first half of this match.

The match dramatically changed after Houston’s red card in the 28th minute. Lodeiro missed the ensuing penalty and Seattle were unable to convert a flurry of chances in the minutes after the red card. Houston immediately went on the defensive, bringing centre back Leonardo in place of right winger Alex.

For the remainder of the match Houston stayed defensive, while still looking to spring counter-attacks through Elis and Manotas. This would prove to be too much, however, as Seattle found the net again in the 42nd minute. Another overload on the left wing between Seattle’s Jones, Nouhou and Dempsey created space for Jones to cross. Bruin finished well, directing his header into the top corner. 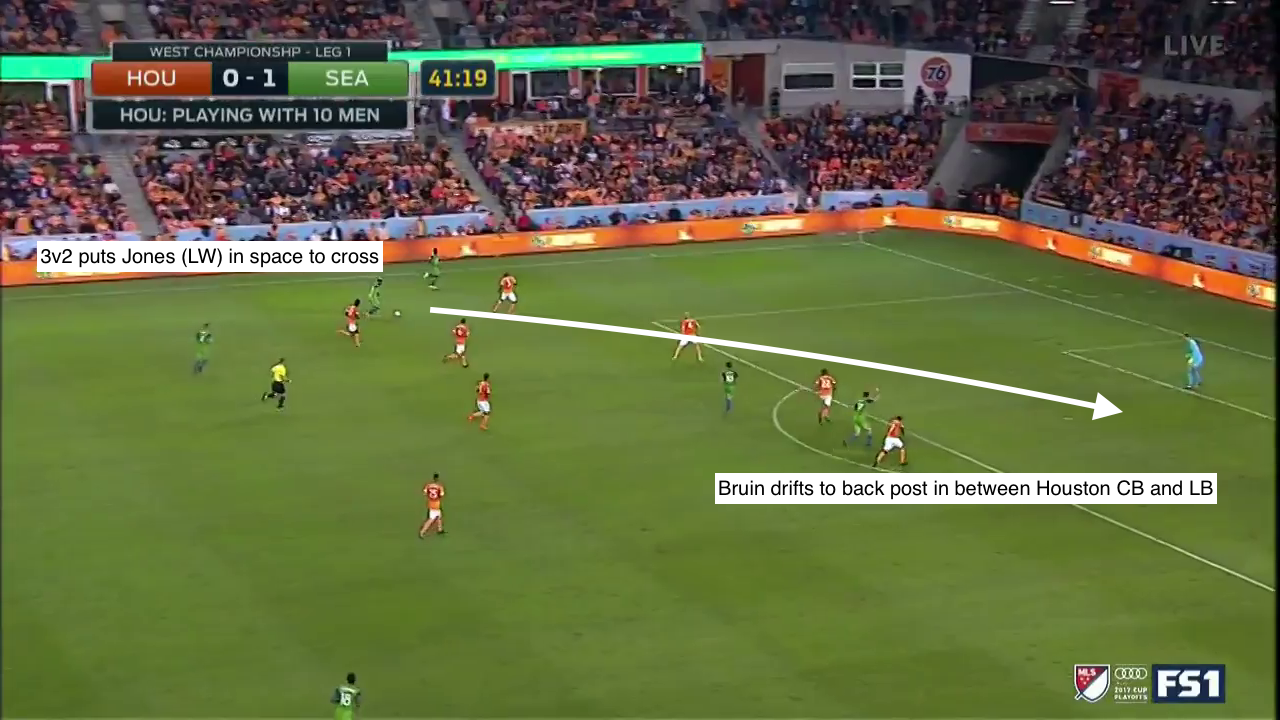 The half would end 2-0 in favour of Seattle. The only change at the halftime break would be Seattle bringing on Victor Rodriguez in place of Clint Dempsey. Rodriguez would look to do much of the same as Dempsey, while bringing more energy and defensive work rate.

Houston did well to keep the score 2-0 by defending compact and not putting too many numbers forward on their counter-attacks. They were able to create some chances on counters but struggled in possession. Seattle maintained control of the game throughout and dictated the tempo. Seattle were patient on the ball but didn’t create many clear-cut opportunities for the remainder of the match. Their tactical approach did not change as they continued to push for an all-important third away goal.

This match started as an interesting tactical display of structure versus mobility but was dramatically changed by the early red card. Although Houston fell 2-0 at home, they showed how dangerous they can be in counter-attacking situations with Elis’ pace and the ability of their whole front four. Seattle showed how lethal the combination of Dempsey and Lodeiro can be as they created numerous chances through their mobility. Houston defended well despite being down to ten men but two away goals could prove to be too much for Houston when they travel to Seattle.

Seattle will host the second leg on Thursday, November 30th. Houston will need two goals to even stand a chance at advancing but will need to remain solid defensively as Sounder’s head coach Brian Shmetzer has stated that they don’t plan to sit in and park the bus.

If Seattle can take a lead at some point, it may prove too much for Houston to bag three away goals. Houston remain positive, however, as head coach Wilmer Cabrera summed up his optimism by asking “Why not?” in an interview last week. The winner of this two-legged playoff will be crowned Western Conference champions and will advance to the MLS Cup Finals. Thursday will prove to be an interesting match, with both sides having everything to play for.