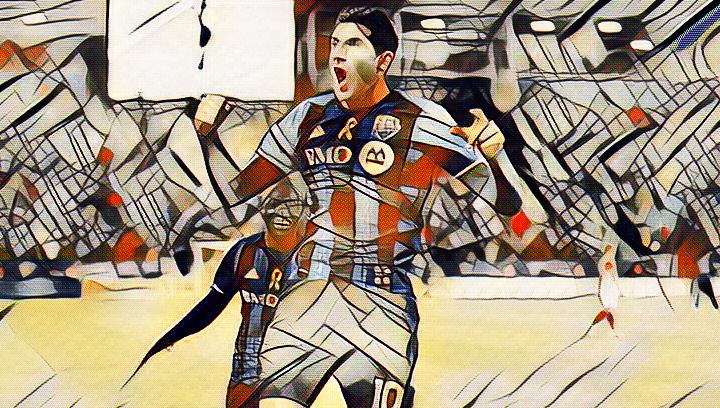 The Argentinian winger has plied his trade across 3 continents throughout his career. Entertaining crowds in South America, North America and Europe. Before making his professional debut for Buenos Aires side Chacarita Juniors, Piatti played for a couple of European youth teams side such as Roma and Galatasaray. Piatti played 50 times for Chacarita, scoring 11 goals over 2 years.

Piatti’s performances in his native country earned him a £720k transfer to French side AS Saint-Étienne in the summer of 2006. The move didn’t work out well and his time was limited to just 4 appearances in 6months.

A move back to his homeland came in 2007 for Piatti as he signed for Gimnasia LP. Impressing in his 3 year spell for the club with 10 goals in 81 appearances led to Argentinian giants Independiente tempting Piatti back to Buenos Aires. Just one season with Independiente and continued impressive performances had teams from Europe interested in his signature. In August of 2010 Piatti made a move to Europe in a £2.25m move to Italian Serie A team Lecce.

It wasn’t an easy time for Piatti and the southern Italian side as they battled to avoid relegation. They managed to do so with a 2-0 win over rivals Bari with one game to spare. As the team continued to struggle Piatti’s chances became less and once again he was on his way back to Argentinian football and a free transfer to his former clubs rivals San Lorenzo came in 2012. It was another 2 year stint and once again Piatti was impressing in the Argentine Primera Division. In the 2013 season Piatti helped San Lorenzo to the league title, finishing the season as joint 3rd Top Goalscorer with 8 goals. Winning the Argentine Primera Division also meant qualification for the 2014 Copa Libertadores which they went on to win, with a 2-1 aggregate win over Club Nacional from Paraguay.

August 2014 and Piatti was on the move again. This time he was moving North of the border and into the MLS signing for Canadian side Montreal Impact. Playing only 6 games in the 2014 season, as Montreal finished bottom of the Eastern Conference, Piatti still managed to score 4 goals.

2015 was a huge improvement for the club and Piatti’s 10 goals that campaign helped Montreal reach the playoffs. They progressed through to the semi-finals where they met Columbus Crew. A hard fought 2-1 win in the first leg was in vain after they suffered a 3-1 loss in the return leg knocking them out the tournament.

The 2015 campaign also saw Montreal make the CONCACAF Champions League Final, meeting Mexican side Club América there. The first leg was a 1-1 draw which saw Piatti net in the 16th minute. The second leg was less than impressive as Montreal fell to a 4-2 defeat.

Another progressive year for Montreal in 2016 and also for Piatti who finished joint 3rd top goalscorer with 17 goals. Montreal once again made the playoffs with Piatti scoring 2 in the semi-finals against New York Red Bulls, setting up a Conference Final against a tough Toronto FC side. Once again Montreal won the first leg but despite Piatti netting in the second game it wasn’t enough as Montreal suffered a 5-2 defeat, knocking them out 7-5 on aggregate.

In September of 2017 it was announced that Piatti had extended his stay with Montreal Impact past his June 2018 expiration. With a record 88 games and 47 goals for the Canadian side.