After a remarkable win against Atlanta United to kick the season off, a draw against NYFC, DC managed to score 5 goals, and keeping a clean sheet for the third time of the season against Real Salt Lake. 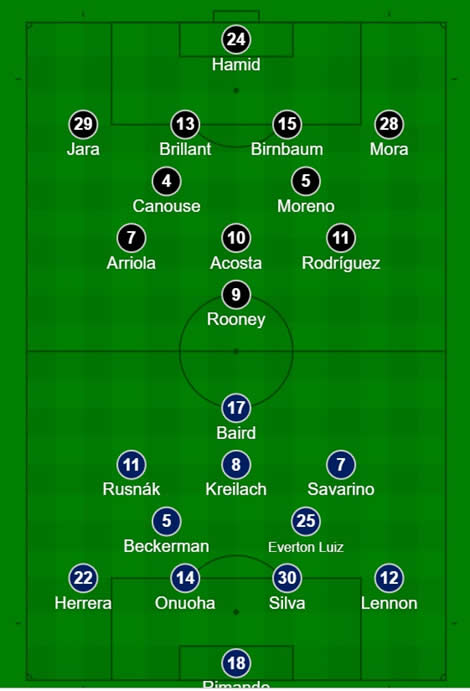 DC made it to the top of the league early this season thanks to their unbeaten streak. The Blacks and Reds haven’t changed their XI since their first game. Discipline, movement and pressure were the key elements of their masterclass.

In terms of tactics, Ben Olsen’s men are not ‘’sophisticated’’ as a side, however their individual abilities added to their consistency results in goals and beautiful football.

Fullbacks are crucial to this side; therefore, they don’t hesitate to push forward and hug the touchline from the very beginning of the attack. Canouse and Moreno would respectively take the place of the fullback close to their side and start the attack from there, getting it to one of the forwards dropping.

Getting to the 2nd and last third of the pitch that’s where the fullbacks can get helpful, Jara and Mora stretch the opposition’s defensive line creating spaces for the forward to exploit.

Acosta, Arriola, Rodriguez and Rooney, 4 names that are known for their individual skills in the MLS world. The experienced Englishman drops to receive the ball between lines with no pressure on him and set teammates in dangerous positions with precise passes.

If Rooney is followed by a center back, it’s the ideal scenario for Acosta, the Argentinian is the player given the biggest amount of freedom on the pitch to step in spaces created by teammates or even become a passing option when the forwards are all marked and finally Acosta can contribute to overloads, creating 2v1 situations with movement.

Arriola, one of the most flexible players in the DC United roster, the number 7 can play as a right back, right midfielder and almost everywhere in midfield. A great crosser and passer of the ball but a helpful support in defense, moreover his pace was lethal in getting behind Herrera but also pushing him inside and creating space for Jara to overlap and get in dangerous positions.

Rodriguez, the latest addition to the Blacks and Reds is becoming as effective as the mentioned stars, the youngster exploits the space created by teammates and his skipper specially but can hurt a lot with his dribbling.

As mentioned above, discipline is crucial in this side. It has been manifested in numerous fashions.

High pressure: no player was dispensed in putting pressure on the opponent, specially when the latter has had a bad first touch or faced his own keeper. The pressure helped DC regain the ball quickly, whether it was with forcing defenders toward the touchline, forcing the keeper to send imprecise long balls or even intercept it while RSL were building and converting it to a goal.

Defense: If the Clarets and Cobalts were able to make it to the final third, United would switch to a 4-4-2 shape with Arriola and Rodriguez coming back to support their respective fullbacks but also Canouse and Moreno would come back to shield the defensive line as well, now that creates 2 compact lines making it almost impossible for the RSL forwards to breakthrough. Rooney and Acosta would be at the end of their own half ready for a counter attack supported by Rodriguez and Arriola. Finally, Canouse and Moreno covering the wide areas left behind Jara and Mora when they wouldn’t track back or a counter attack would be on.

A penalty is given after a VAR review that would start Marcelo Silva’s terrible night who made the foul on Arriola and received his first yellow that will be followed with another one in the 66th minute and will leave the pitch after a mediocre performance. The DC United skipper opens the scoring in the 34th minute.

Rodriguez and Rooney press Marcelo Silva and giving him a tough time to build up from the back, the defender still manages to get the ball to his left back Herrera, while a sprinting Jara sees the pass and puts the pressure on Herrera before he has the time to turn, the right back intercepts the ball and passes it to an onside and composed Rooney who chips it to double the lead.

Marcelo Silva at fault yet again, the defender tries to carry the ball to midfield but it goes terribly wrong his touch wasn’t perfect to say the least, Moreno steps in, intercepts the ball, passes it to Acosta who is positioned between the lines thus has space to run into and the time to pick a good pass. Rooney makes a run to the right, while Arriola is coming from behind towards the right flank as well, the defensive line is in deep trouble and to add fuel to the fire Silva doesn’t track back, a space is open on the left side, Moreno smartly runs into it, Acosta passes the ball, Lennon has a decisional crisis and is between Rooney and Moreno in a 2v1 situation, Moreno passes the ball to the Englishman who completes his first hattrick of the year.

Rooney is having a good day at work, he had just hit the post after a deflection a corner kick has to be taken, he sees Rodriguez alone on the edge of the box, puts a perfect long ball towards the Argentinian, Baird was the closest player to put pressure on Rodriguez but had to mark Birnbaum, and when he made the decision to leave the latter to defend to stop the superb volley, it was too late, Lucas Rodriguez had just opened his goal tally with DC United.

Moreno didn’t have any mercy on Herrera, for the second time he catches the left back flat footed, intercepts the ball and sends Segura who finds the net and scores the 5th for the Blacks and Reds.

On one hand, Real Salt Lake lack of discipline and awareness in their pressing, keeping certain lines high and pressing while the rest would sit back cost them their ability to be compact and to close down spaces; that was one of the major reasons concerning their defeat besides the fact that they were playing with 9 men.
On the other hand, DC United are showing a great amount of skill, discipline and quality since the start of the season, its still early in the season but could it be the season where DC would progress deeply in the playoff ? Only time will tell.