A confusing story has surfaced regarding the status of Orlando City’s Cyle Larin. Photos have emerged of Larin not only in a Besiktas shirt but undergoing a medical. Besiktas have been linked to Larin for nearly a month now, and have just completed the sale of star forward Cenk Tosun to Everton in England. The player expressed his desire to move across the Atlantic last October. 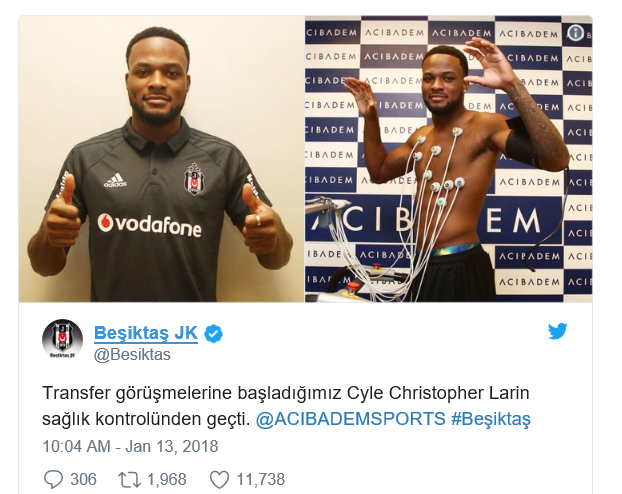 Orlando City have made their own statement…

“Orlando City SC is aware of the announcement made by Beşiktaş J.K. regarding forward Cyle Larin. The Club has not agreed to terms on a transfer of Larin and will take all necessary action against Beşiktaş in response to the announcement.

Larin remains under contract with Orlando City through 2019 and is expected to join his teammates at preseason camp later this month.”

I DON’T BELIEVE IN WALLS

Landon Donovan, Major League Soccer’s all-time leading scorer and the namesake of the league’s MVP trophy, is making another return from retirement with Club Leon in Mexico.

Club Leon have been very active on twitter, posting an image of Donovan wearing the club’s green home jersey, welcoming him to the team followed by a Twitter exchange in which Donovan, who had reportedly been visiting the city of Leon for the past few days, expressed his fondness for the city, the club and the fans, and a desire to wear green and win trophies for Leon. Donovan’s tweet also suggested his latest comeback could be partially motivated by sporting diplomacy, with the phrase “No creo en los muros”, translated as “I don’t believe in walls”

Donovan is MLS’s all-time leader with 145 goals and 136 assists. He has not played in a competitive match since the end of the 2016 MLS campaign, when he re-joined the LA Galaxy for their playoff push, appearing in six regular season games and three playoff matches.

Donovan’s representative is also the representative for Giles Barnes, who will now be a teammate of Donovan’s at Leon. At Leon, Landycakes will follow a tradition of American players that also includes Marcelo Balboa, Eric Wynalda and current goalkeeper William Yarbrough.

Chicago Fire are close to sending Orlando City the rights to one of their top academy prospects, according to a new report from Chicago-based journalist Paul Tenorio.

Fire product and University of North Carolina midfielder Cam Lindley has been one of the top players in college soccer over the past two NCAA seasons. But after he reportedly turned down multiple contract offers from the Fire during that time, Chicago are ready to ship his Homegrown Player rights to Orlando in exchange for fullback Rafa Ramos and allocation funds, Tenorio reports.

Trading a player’s Homegrown rights in this fashion is a rarity in MLS, but not unprecedented. A year ago the New York Red Bulls traded away the rights to Adam Najem in a deal with Philadelphia, and did something similar with Bryan Gallego’s rights in a 2012 transaction with Portland. Toronto FC did similarly with their rights to Kevin Aleman and Josh Janniere in previous years.

Real Salt Lake are pursuing Mexican national team and Tigres midfielder Jesus Dueñas, according to sources. RSL recently spoke to the 28-year-old midfielder about joining the club this offseason. Dueñas has spent his entire professional career with Tigres. Primarily a box-to-box midfielder, he recorded one goal and five assists in 21 games to help the club to the 2017 Apertura title in December. A regular starter since 2013, he has 16 goals in 220 career league matches and has won three Liga MX titles with Monterrey-based side. He started their Clausura-opening loss at Puebla last week.

A member of the Mexican national team since 2015, Dueñas has one goal in 23 caps for El Tri. He played in four matches in Mexico’s successful World Cup qualifying campaign, and was a regular during the CONCACAF Hexagonal.

LAFC have bolstered their coaching team with Mike Sorber as director of soccer operations, Ante Razov, Marc Dos Santos and Kenny Arena as assistant coaches, and Zak Abdel as goalkeeping coach… New York Red Bulls have become the latest MLS club to dive into the computer world, signing Mike LaBelle as the club’s first eSports player… Preki has officially been unveiled as an assistant coach on Brian Schmetzer’s Seattle Sounders staff for the 2018 season.