At midweek game New York City FC and Real Salt Lake played against each other. It took place at a legendary place, the Yankees’ stadium (also a home ground for NYFC since 2015). The leader of the Eastern Conference continues their fantastic season with a stunning performance. They beat the RSL 4-0. 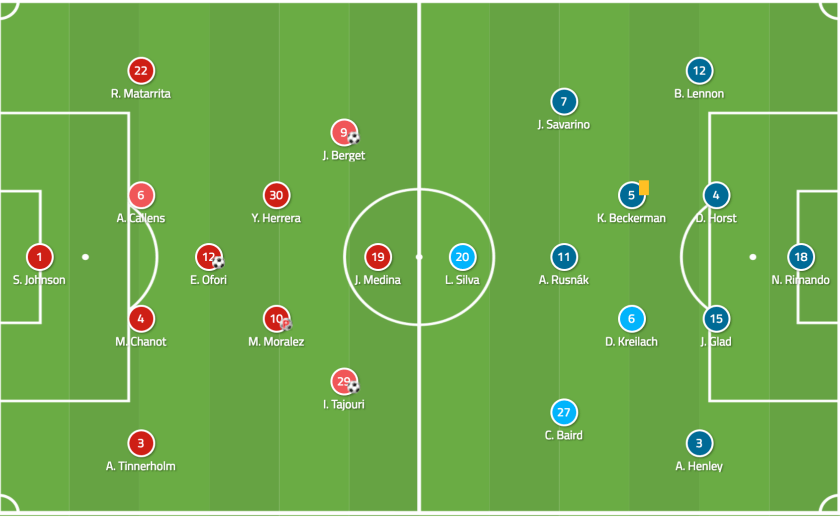 NYCFC is still undefeated in MLS and they started in there usual 4-3-3 formation. Interesting fact that against the ball they formed a 4-2-3-1 shape, but mostly they had the ball and they controlled the game throughout the whole match. In the first half they had in possession around 70%, therefore they emphasised on their positional play. So, there are interesting details can be found in this phase of their game. When they were in possession, they played in a 3-2-2-3 formation. Which similar to one that Manchester City used in last season. However, the NYCFC first line is narrow, the two defenders and the defensive midfielder positioned themselves in close range to each other. They don’t stretch out this shape. And also, the last line is narrow, whilst only the fullbacks trying to add depth to the team, because they hugged the touchline. 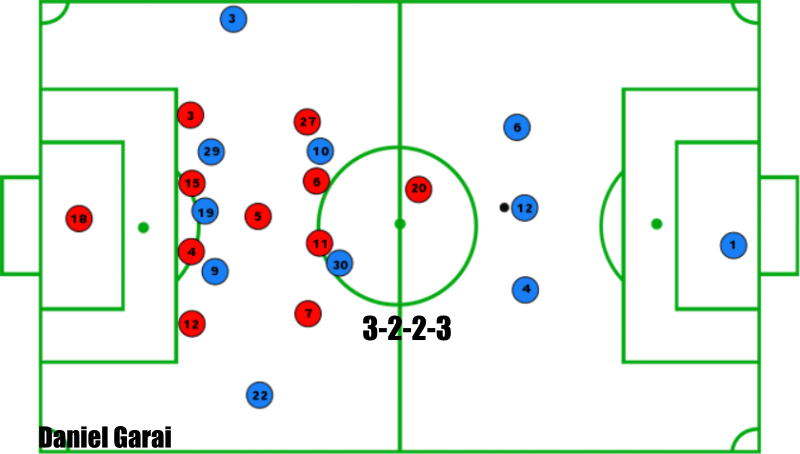 Also, noticeable the two fullbacks at the wings, they positioned themselves high on the pitch. Therefore, the two actual wingers, Berget and Tajouri could move inside and occupied a position next to opponents defenders. Therefore, the opposing defensive lines must be narrow in order to be compact and limiting the space, and closing down the passing lanes towards the forwards. Thus the two home side fullbacks were usually free at the wings, especially Tinnerholm. So, it was not a coincidence that Vieira asked his team to frequently use the right side. Targeted Tinnerholm with long balls, who cause plenty of trouble for the guests. The first goal happened thanks to Tinnerholm. 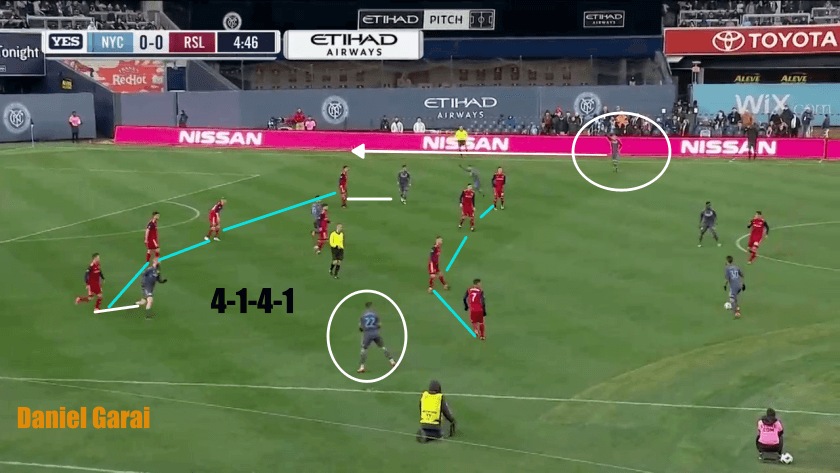 Real Salt Lake choose a much more defensive approach, 4-4-1-1 formation, which transformed into a 4-1-4-1 when it comes to the defence phase. After the first 15 minutes (after the first goal) Mike Petke made a slight modification. He asked Baird to drop to the defensive line to make a 5-1-3-1 or 5-1-3-1 formation. The one more man in the last line means they could manage to neutralise Tinnerholm’s threaten. In theoretically. But in the reality Baird did not mark tightly Tinnerholm, thus New York FC could use this pattern. 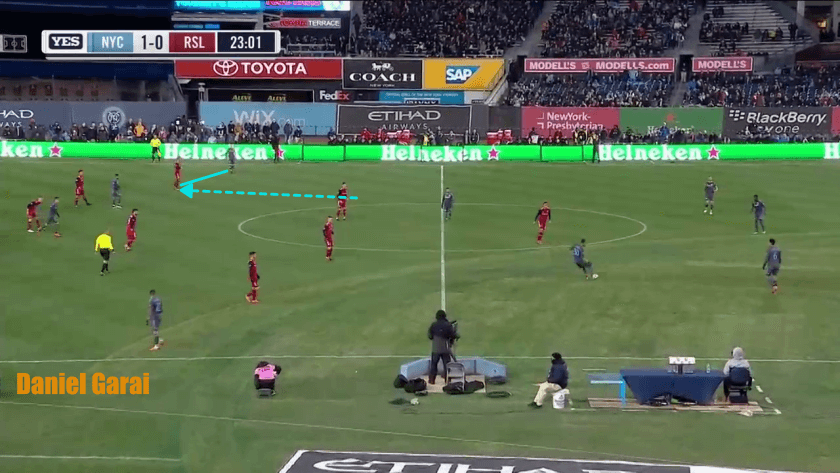 Baird moved back to pay attention to Tinnerholm.

As I said earlier, New York FC played with two offensive fullbacks and the front three positioned narrow. Their task was to be available for passing. It means that they moved a lot and drop back to get a ball. However, in that circumstances, it was a hard job to get the ball to them.

Moreover, Patrick Vieira had allowed Morales to move higher position and let the other centre midfielders to circulate the ball. By the way, Ofori was the player, who drop between the two centre defenders in order to help the build-up. They could circulate the ball quite smoothly without major pressure.

The Salt Lake’s striker, Silva had a greatly important role. He had to cover shadowing the centre of the pitch and the dropping opponents, especially, Herrara. If it did not happen then Salt Lake become vulnerable. As you see below, the man on the ball had 3 quite good option for progress, which is dangerous. 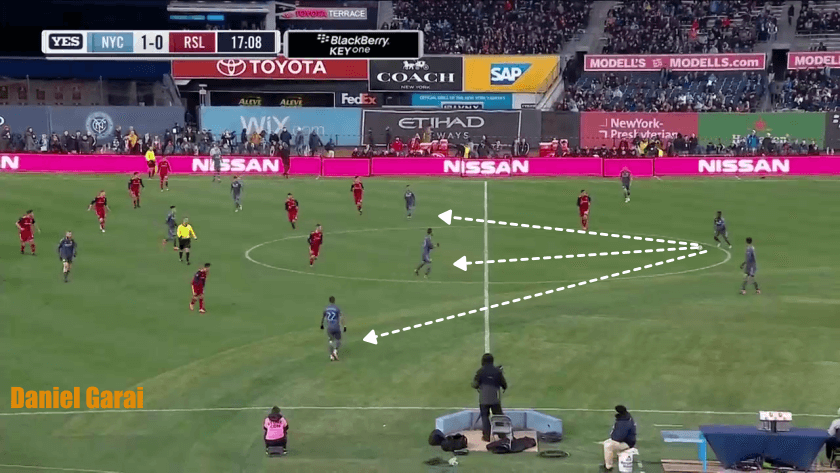 If that worked properly still could have been dangerous situations, like this. 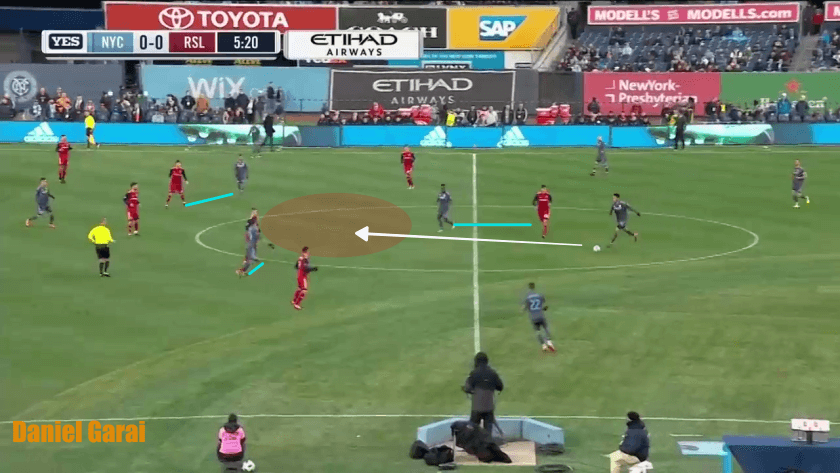 Silva blocked the opponent and Rusnák marked tightly Herrera, but he dragged out a little bit, also the other Kreilach and Beckerman were deep because of Morales and the dropping Medina. Therefore, there was a space at the halfway round, thus Callens could penetrate this space. Theoretically, if the Blues’ defenders were more courageous and they tried to progress up in the field or dribbling up the field it could invite the pressure. Which lead to a decision-making crisis. Because the opponent’s midfielders have to decide that they staying their position and mark Morales and his team-mates. Or leaving their position and stop the dribbling opponent. Which means Morales and Herrara could be free, thus it would be a highly dangerous situation.

Moreover, you can see below that if home side midfielders moving away from their markers because they offer the vertical option and also have more time and space on the ball. But it creates a numerical superiority around the halfway line, which is unnecessary.

Another situation where the dropping Medina had a big role. He could separate from his markers and got the ball and before Beckerman could reach him he passed quickly to Mataritta. Great movements of the NYCFC players. 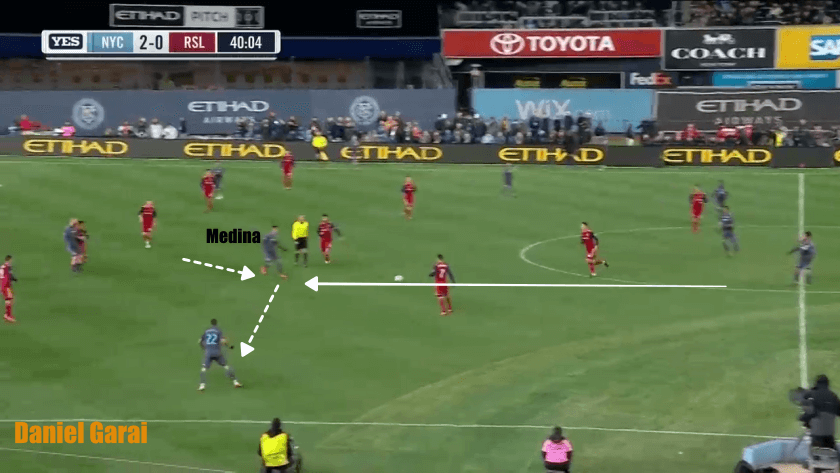 Lastly, after a throw-in, one side of the pitch had been overloaded, but Herrera, and Matarrita at the weak side they offer to outlet for the team. 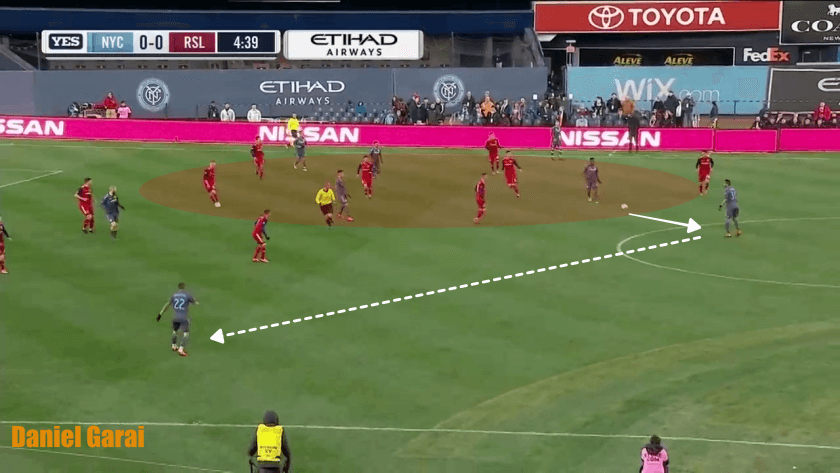 Because of the fact that there were 16 corners at the whole match, so it could be expedient to discuss a little bit. Moreover, the way that home side was defending these situations were quite interesting.
New York City FC chooses to defend in a mixed system, but with some modification. Usually, in the mixed system, only a few (2-3) players tasked to use zonal approach and the others marked the opponents. But in our case, Vieira order to switch this proportion and tasked most of his players to defending in a zonal way and only a few marks opponents. 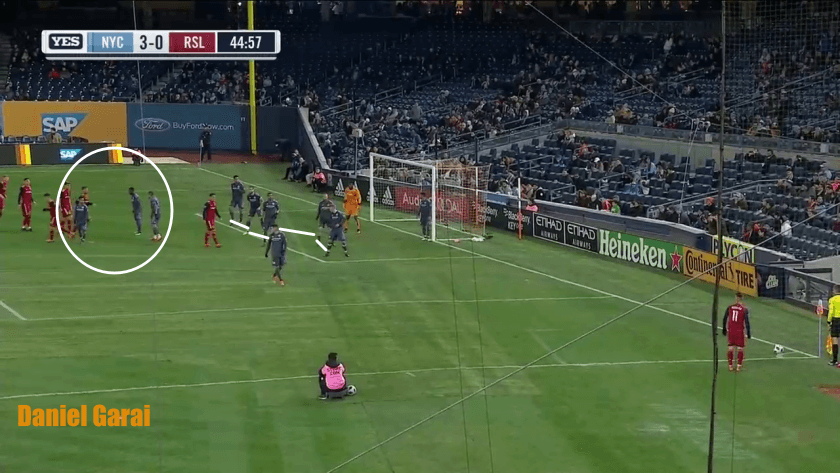 In the Second half, the guests tried to take control of the game and press high to take chances, but it was not succeeded, because of the fact that NYFC was more capable of control the match and played a possession-based game. They could score more goal in that half, but one happened (Ofori). However, Patrick Vieira’s man shows their strengths. They managed to get behind the opponents’ defence through the flanks, which led to 3 goals. It seems to me that they found the right pieces in this year.